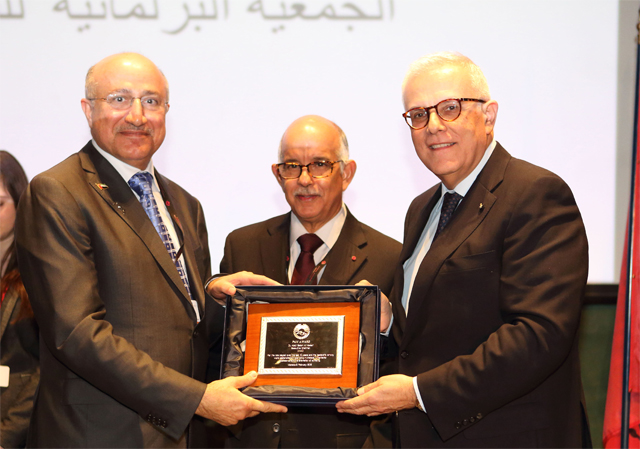 Dr. Abdul Salam Al Madani, the Executive Director of the Dubai International Humanitarian Aid and Development Conference and Exhibition (DIHAD) and the scientific board (DISAB), attended the 9th edition of the Parliamentary Assembly of the Mediterranean (PAM) annual meeting which was held on Monaco last week, after receiving an official invitation from the higher committee.

For three days, a number of high profile keynote speakers addressed the participants on current priority issues such as Counter Terrorism; Political developments in the Middle East and North Africa; Activities of the PAM Panel on Trade and Investments in the Mediterranean; Climate Change and more.

And on the last day, the PAM committee granted the Pam personality award of the year 2015 to Dr. Abdul Salam Al Madani for his role in developing and reinforcing the humanitarian and development sectors during the past 10 years on and also for his outstanding contribution to this field as one of the key players in the humanitarian, aid and development fields in the world, through DIHAD conference and exhibition, in addition to his vital role at the anti-smoking alliance.

After receiving the PAM award, which is granted for the first time to a person outside the PAM committee members, Dr. Al Madani delivered a speech where he extended his gratitude to the committee and referred to the accelerated development that DIHAD conference and exhibition achieved over the past 10 years.

Dr. Al Madani also said: “I am very delighted. I am also proud of this award and recognition and I would like to dedicate the PAM award to H.H. Sheikh khalifa bin Zayed Al Nahyan, President of the United Arab Emirates and to H.H. Sheikh Mohammed bin Rashid Al Maktoum, Vice President and Prime Minister of the UAE and Ruler of Dubai. We are sons of Zayed and we follow his steps and we also follow the vision of the UAE which focuses on humanitarian development and encourages cooperation between the private and public sectors.”

The assembly also granted DIHAD conference and exhibition an annual seat at the PAM meeting as an observer. The PAM committee also elected Morocco to be the next host of the PAM Meeting and elected a new president for the coming year. In a short period of time, PAM has established itself as the main actor in parliamentary diplomacy in the region, and its commitment to the founding principles and its Charter is guaranteed by the continued support of all its member parliaments.

PAM is a regional interstate organization, an Observer at the General Assembly of the United Nations and with a specific international juridical status. The Assembly plays a fundamental role as an organization whose activities are firmly rooted as a complementary asset to the work of other regional and international bodies entrusted with the responsibility to foster security, stability and peace in the Mediterranean.