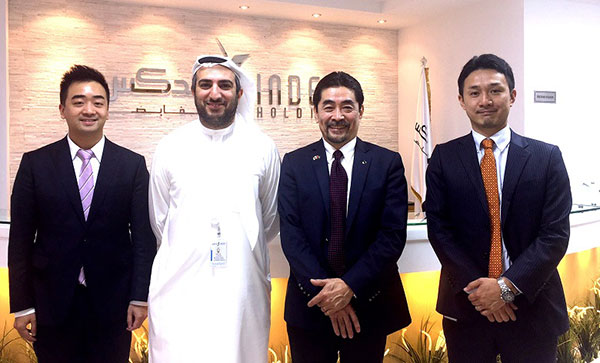 Dubai, United Arab Emirates,16th of February, 2017: INDEX Trading & Investment (ITI), a member of INDEX Holding, signed a MoU this Thursday with Smartmedical Corp., at the headquarters of INDEX Holding in the city of Dubai.

The MoU defines the licensing alliance of Emotion AI technology “Empath”, Emotion Recognition Technology from Speech, named and developed by the ICT division of Smartmedical Corp. Empath can identify emotions in real-time regardless of language, by analyzing multiple physical properties of voice.

Mr. Nozumu Shibasaki, CEO of Smartmedical Corp., commented saying: “This technology has been already utilized in various fields such as mental health centers, call centers, and it was used in robotics. By analyzing multiple physical properties of your voice such as intonation, pitch, speed, and power, Empath can identify your emotion in real-time. We do not focus on what you say but how you say it. Through Empath, we can detect your emotion whatever language you speak.”

From his side, Eng. Anas Al Madani, Vice Chairman & Group CEO of INDEX Holding said: “The UAE government is always keen to adapt new technologies and innovations that can evaluate and improve happiness. In March 2016, His Highness Sheikh Mohammed bin Rashid Al Maktoum, Vice President and Prime Minister of the UAE and Ruler of Dubai endorsed the launch of the corporate happiness and positivity initiatives in the UAE Federal Government to enhance happiness status among employees and customers and to make happiness a lifestyle.”

Eng. Anas Al Madani added: “As a leading UAE national company, we are always keen to support governmental initiatives that are of great benefit to the country and its citizens. Through our series of connections and collaborations, we will promote this new technological innovation “Empath”, that we believe can gain great success in this region, and we will contribute in making the UAE the happiest nation in the world.”

It is worth mentioning that recently the Japanese company has also signed a cooperation agreement with the UAE Ministry of Interior on the sidelines of the World Government Summit, 2017. Aiming to enhance cooperation between the two sides, the agreement will allow the ministry of interior to avail the applications and technologies presented by the Japanese company in the field of enhancing happiness and positivity.