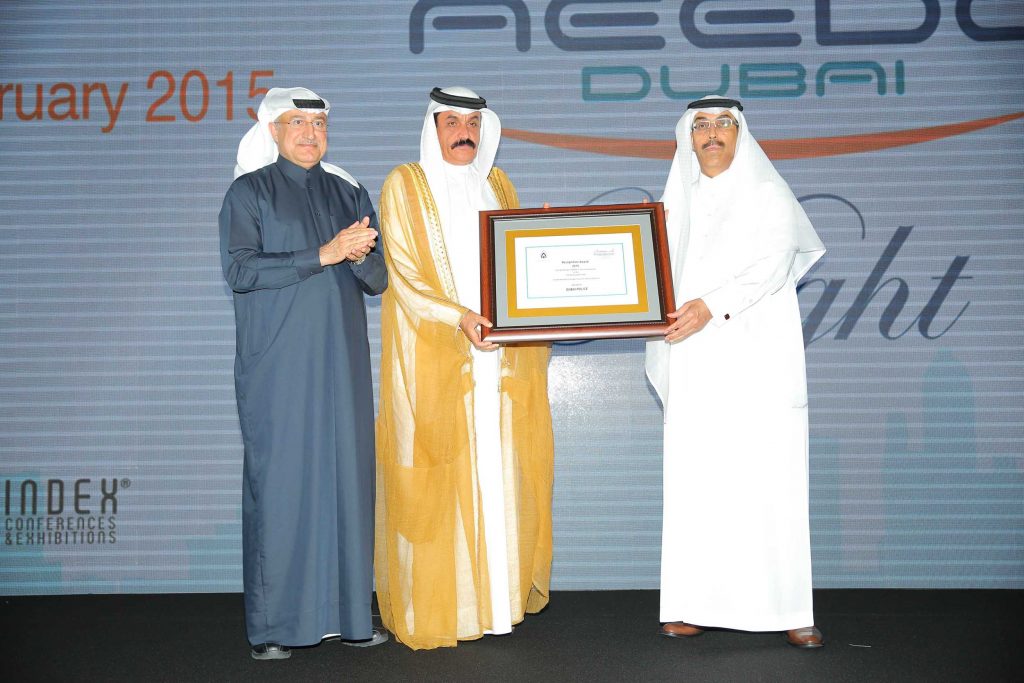 Business Deals Sealed during AEEDC Dubai recorded $2,856,600,000 Dollars for this year and the event hosted 40,000 Visitors and Participants

AEEDC Dubai Night is considered one of the major annual activities that take place during AEEDC Conference and Exhibition. The ceremony included a number of recreational and cultural shows, gaining admiration of all the attendees who expressed their delight about all the presentations and accompanying entertainment shows. The ceremony also witnessed the handout of various awards by Global Scientific Dental Alliance committee, given to prominent personalities in dentistry field for their achievements in the dental sector and to prominent local sponsoring institutions.

During the event, members of the Executive Council of the Global Scientific Dental Alliance presented the AEEDC Appreciation Award to Dubai Police for their leading role in enabling security and safety for the visitors and tourists of Dubai. Also to their general role in responding to all cases and for their continued support and cooperation with INDEX Conferences and Exhibitions in all events organized throughout the year. This is the first time for the Global Scientific Dental Alliance to offer this award to a security force.

H.E. Major General Khamis Mattar Al Mazeina, Commander in Chief of Dubai Police, received the award and expressed his gratitude to both the Alliance and INDEX, wishing them continuous success and achievements for AEEDC and all other conferences and exhibitions organized by INDEX. He also commended INDEX for their leading role in supporting conferences and exhibition tourism, which attracts thousands of visitors and tourists from all over the world every year.

From his side, Dr. Abdul Salam Al Madani, Executive Chairman of AEEDC Dubai and The Global Scientific Dental Alliance, welcomed the guests saying: “I want to wholeheartedly thank our wise leaders, and all those who worked hard to make AEEDC the success it is today, and our visitors and participants. They helped us make AEEDC the second largest dental conference and exhibition in the whole world. I want also to invite you to attend AEEDC Dubai 2016, which will witness many surprises and extra activities.”

On the sidelines of the Dubai Night event, H.E. Major General Khamis Mattar Al Mazeina accompanied by Dr. Abdul Salam Al Madani presented the “AEEDC International Personality of the Year Award” to the French Professor Michel Goldberg, in recognition of his great achievements in the dentistry field.

It is worth mentioning that Professor Michel Goldberg is a dental surgeon, a doctor in dental science, who served in many scientific committees and associations, an accomplished author of over 2150 scientific papers, involved with many conferences around the world, a researcher in Oral Biology, Embryology, Histology and Tissue Engineering. Professor Michel Goldberg is an active member of the AEEDC International Advisory Board and was instrumental in the organization of the inaugural French Language sessions.

AEEDC Dubai Night witnessed also the recognition of a special person too who is the first dentist in UAE, the late Dr. Jawad Al Rida. The award was presented to his family on his behalf. Dr. Jawad opened his clinic in Deira neighborhood, where he practiced his profession of dentistry for forty years and used to work seven days a week. Dr. Jawad traveled frequently to Oman, to check up on his patients. Their Highnesses the Rulers of the Emirates used to refer their employees for treatment at the clinic of Dr. Jawad; their trusted and reliable doctor.

AEEDC Dubai 2015 concluded today after three days of business, scientific and entertainment activities held at the Dubai International Convention and exhibition Centre. 40,000 visitors and participants attended the event this year with a consensus that AEEDC this year exceeded all expectations and witnessed a great success and improvement.

In the conclusion of AEEDC Conference and Exhibition, Dr. Al Madani announced the business deals sealed during the three days of AEEDC Dubai recorded $2,856,600,000 this year which of course reflects the trust that companies and consumers have in AEEDC and in Dubai, and he also announced that the number of visitors and participants exceeded the expected number and reached up to 40,000 visitors and participants during the three days of the show.

AEEDC Dubai is organized by INDEX Conferences & Exhibitions a member of INDEX Holding.